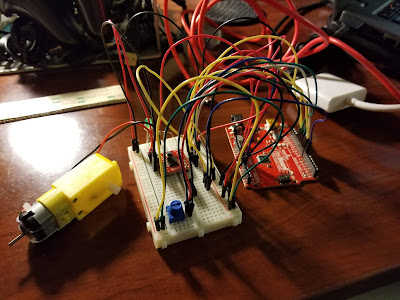 Last summer, I was offered the opportunity to hold robotics classes at a nearby middle school. I jumped at the chance because it would allow me to have complete control over the curriculum. I had already spent several years helping with a high shool's FIRST Robotics Competition (FRC) team, but I was starting to feel constrained by the rules and expectations of the games. This time, there would be no need to balance the students' fun and education with success at regional competitions.
Not to say that there weren't downsides. While at least one other mentor was present to help the students, none of them had any previous experience with robotics. Classes were held in a normal middle school classroom with no access to any tools or parts. The school provided computers to all students, but they were locked-down Chromebooks that I couldn't install any additional software on.
These conditions led us to use the Sparkfun Inventors Kit 4.0 as a base for the hardware. It's relatively affordable and comes with all the parts needed to assemble a simple driving chassis. The electronics include the RedBoard, which is Sparkfun's Arduino Uno clone, and a handful of sensors, LEDs, buttons, and switches. A nice printed manual with step-by-step instructions and lots of illustrations is also provided. We rarely used it in our classes, but it did provide inspiration and guidance when planning the projects. The only flaw was the flaky ultrasonic rangefinders, but those have since been upgraded in the new 4.1 version of the kit.
Most of the students had already been introduced to Javascript programming in previous classes, so we wanted to keep using the language to program the RedBoard. The Johnny-Five Node.js library was the obvious solution for us due to its compatibility with a large range of peripherals and excellent documentation. There is also a convenient Chrome app that packages the library with a simple UI. We used this app all through the first round of classes, but frequent bugs and inability to save code to the filesystem drove me to adopt a different approach. I got out a stack of old laptops that I had accumulated over the years and installed Linux and Johnny-Five on them. Students would use the built-in text editor (either mousepad or gedit) to write code, save them to files on the desktop, and drag the files to a special icon that would invoke Johnny-Five to connect to the Arduino and run the program. 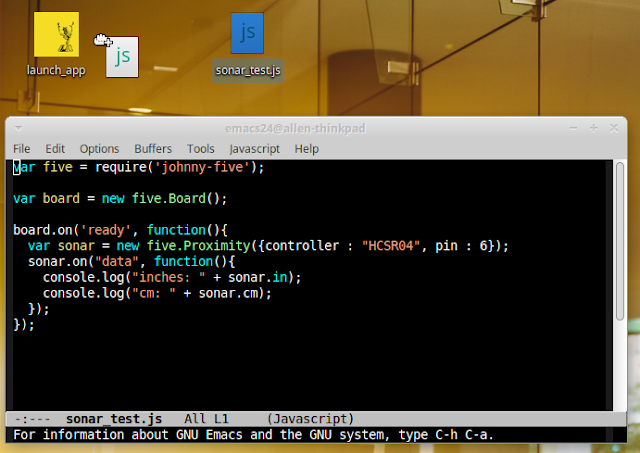 After assembling the parts and software, the next big challenge was to think of an fun projects for the students. Middle school kids lose interest a lot faster than the high schoolers I was used to, especially after a long 6-hour day of classes. I initially started each class with a short slideshow on the technology relevant to the following project, but this failed to make much of an impression. Later, I began class with the first part of the project, and after their interested was piqued by the new sensor  or actuator, I would follow up with an explanation about it that would be needed to finish the rest.


The projects increased in complexity until the students could assemble a driving robot that used an ultrasonic rangefinder to navigate. For the first course, the robot was supposed to follow a hand that was placed in front of it. This turned out to be a exciting way to physically interact with the robot and learn how to build up complex logic in Javascript. The fun and challenge both increased in the second course. The robot hardware ended up mostly identical, but the assigned task was to navigate through a simple walled course. Teams were encouraged to finish the course in the least amount of time. The sense of competition infused much more energy and focus into the students than ever before. I am still reluctant to admit it, but the prospect of winning or being the best is a crucial motivator for many people.

Although it was hard work, I thoroughly enjoyed running my first robotics classes. My fellow mentors were extremely helpful and encouraging; the lessons wouldn't have been nearly as effective without their assistance. Though the students were sometimes hard to control, they were truly inspiring with the energy that they brought to the class. Some even engineered novel solutions that I had never considered and asked thought-provoking questions that led me down rabbit holes I wouldn't have otherwise explored. In all seriousness, I'm hopeful that this experience will encourage them to use technology to improve the future.
Posted by althebaker43 at 7:18 PM No comments: