So much for the two-week posting schedule. Let's see if we can fix that.
I was actually holding off on another post until I had something of my own up and running. Well, it turns out that hardware is hard, so this seemingly simple project that I started at the beginning of the summer didn't reach a notable milestone until today. The milestone in question is one that is familiar to any programmer. 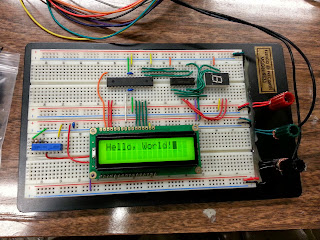 The breadboard pictured above contains an Atmel AVR ATMega328P microcontroller (top) and a NewHaven Display NHD‐0216K1Z‐FL‐YBW LCD module (bottom). The goal of this project was to program the AVR with an assembly program to control the LCD module to print "Hello, World!" to the display. To the right of the AVR on the breadboard is a 7-segment LED display and BCD-converter chip that I started playing around with after being stymied by the LCD module for a few weeks.
It's taken me a ridiculously long time to reach such a simple goal, but I've learned quite a bit about the AVR's internals, assembly syntax, and the Atmel Studio development environment in the process. One byproduct of this work is a Python script I wrote to convert output from Atmel Studio's built-in simulator to VCD format so data nearly any internal register can be collected and plotted as a digital waveform.
The assembly code, simulation script, and schematic files for the test-bench circuit in the photo is available at this GitHub page. The included README contains some tips for setting up the development environment in Windows, such as using the simulator, converting the output, and programming the AVR with a USBTinyISP.
My next steps will be to port this project to AVR-GCC, as Linux is my preferred development environment. SimulAVR seems like a promising replacement for the simulator in Atmel Studio, which was difficult to interface with external signals. Afterwards, I'll either work on reorganizing the code into a library that can be included with future assembly projects or add more code so that the functions can be exposed via a bus interface, so that a single AVR can be addressed by several other modules on a network to print out diagnostic data. I get excited about the possibilities just typing about it. I'm so easily amused.
Oh, and another program to display a countdown on the 7-segment display is available here.
Posted by althebaker43 at 5:06 PM