It's been quite a while since the last (and first) post, but Spring Break is upon me, which means I finally have enough time off from classes to come up for air and publish a few new posts. The first of these is some footage from Automate 2013, a conference of industrial automation providers. Floor passes were free, so I dropped by for a couple of hours in between classes and acquired the following photos and videos.
The first of these is a short clip of the Staubli TP80 picking and placing Tic-Tac boxes. This picker machine pivots its arms at mind-blowing speeds, topping out at 200 picks-per-minute. I heard that the one shown above was operating slightly slower than that due to the lack of reinforcements to secure the body. They even had to cut out a square of the carpet underneath the enclosure it to ensure that it wouldn't tip itself over. More details about this machine can be found here. 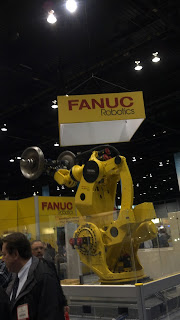 Next up is the Fanuc M-2000iA, "the world's largest and strongest six-axis, modular construction, electric servo-driven family of robots designed for a variety of manufacturing and systems processes" (more info here). I'll believe them, as this was easily the biggest robot present on the conference floor. The one pictured above spent its time continuously flexing and rotating a locomotive axle above the heads of the surrounding crowd.
Again from Fanuc, we have the M-1iA, which is a 6-axis gonkotsu (fist) robot. It's another picker robot, and while it's not as fast nor strong as the Staubli shown above (0.5 kg maximum load versus 1 kg maximum load), it supposedly has better repeatability (+/- 0.02 mm versus +/- 0.05 mm). It also seems to employ an integrated vision system to improve accuracy and reliability. More info here.
Last but certainly not least is this gem from Industrial Perception, Inc. Lacking from their website is a lineup of standard models, so they might only offer custom solutions. The robotic arm shown above uses a camera near the gripper to scan a mixed bin of items for one that matches a given model. It looks over the entire bin, highlights the item with the closest match, and then dips down to grab it. Due to the overhead video feed showing the robot's view and object tagging process, this display was my favorite from the entire conference.

Email ThisBlogThis!Share to TwitterShare to FacebookShare to Pinterest
Labels: events